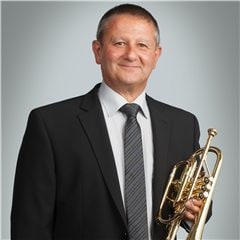 Angelo Bearpark was born in Oldham, England. At the age of 7 he began his musical career as a member of the Dobcross band. In the English solo championships 1976 he won the title in all categories. In the same year, he joined the famous Black Dyke Mills band, with whom he won several titles such as the British Open, the National Championships of Great Britain and the European Brass Band Championships. During this time, Angelo Bearpark had the privilege of taking lessons at the famous James Shepherd and played with him in the James Shepherd Versatile Brass Ensemble.

In 1982, Angelo Bearpark moved to Switzerland. He is a member of the Fanfare Cécilia de Chermignon and founded his own music school. He also played with various bands such as the Brass Band Biel, the Brass Band Berner Oberland and the Brass Band "treize étoiles".

In 1986, he founded the Angelo Bearpark Brass Ensemble and took part in numerous concerts in Switzerland and on several tours abroad, including Japan and Australia. Currently, Angelo Bearpark teaches in his music school and works as a music consultant with a variety of ensembles.