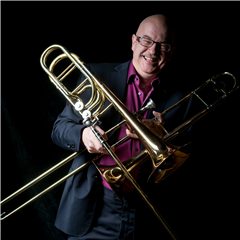 "If energy becomes sound, and the passion is heard as a melody, I feel good."

With this statement, Armin Bachmann expresses his passion. His studies, which he completed in Germany and Switzerland have resulted in years of travel that have lasted until today. A trombonist in a number of prestigious European orchestras, he was also active in chamber music performing with ensembles such as the Swiss Brass Consort, Ensemble Contrasts Nuremberg, Duo Pazzo Munich to name just a few.

Passionate about education, Armin Bachmann is a professor at the Academy of Music "Franz Liszt" in Weimar, has given master classes in Tokyo, Paris, Manchester, Vienna, Munich, Helsinki and Lugano, was head of the Music School in the region Burgdorf, has been a speaker at various workshops and a conductor of youth ensembles in addition to his work as a speaker and presenter at concerts.

To date, Armin has made more than 45 CD recordings, appeared on numerous live radio and television performances and has performed numerous world premieres of contemporary works.

A passionate alphorn players and a casual euphonium player, his lifeblood flows for the Slokar Trombone Quartet with which he, together with his former teacher Branimir Slokar, has performed around the globe since 1983.

In 2012, Armin Bachmann was awarded the Prize for Music for The Canton of Solothurn.